How To Prevent Motorcycle Theft

You take good care of your ride, but how careful are you when it comes to the threat of motorcycle theft? It is relatively easy to steal a bike, and it only takes a matter of seconds for your beloved ride to be on a truck or in a large van and gone forever. However, you’re not helpless in the face of motorcycle theft either, and you don’t have to keep your bike locked in the garage all summer because of it. Here are some tips to keep your motorcycle out of the hands of thieves.

First thing is first, you need to be aware of scenarios that place your bike at risk. If you think like a thief when you park your bike, you may stop and reconsider your surroundings before walking away. Good indicators that you’ve chosen a bad spot include spots that are out of your line of sight, secluded places with no public presence, and places where trucks could easily pull up beside your bike and load it. If you can keep your bike within your vision most of the time, you’re far less likely to worry about it, even when you step out of sight of it for a moment.

Public presence is also a good theft deterrent as it’ll raise an alarm among bystanders when a bunch of guys show up and try to load your bike into a vehicle. Well monitored places with security cameras or guards will deter theft as well. Park your ride in a spot you think it would be hard to steal it in, and you already have a leg up on potential thieves.

Parking your motorcycle in a relatively safe spot is just the first step. You’ll need to have one or several anti-theft devices installed as a back up measure against motorcycle theft. We’ll look at several theft devices based upon their overall effectiveness.

One of the most common theft devices come in the form of a bike cable or chain. Similar to a cycling chain, a bike cable loops through the wheel of your bike and attaches to a nearby structure like a lamp post, etc. While this is a basic theft deterrent, this device has two drawbacks. First, there isn’t always something around to hitch your bike to, and a good pair of cable cutters can bypass this measure rather quickly. This item will still slow thieves down, but it’s not the most effective measure out there. One extra note, a very thick chain, although harder to carry on your bike, will be a wise addition if you have to park your bike on the street full time. Most owners who park their bikes on the street full time recommend at least an 18mm chain.

Motorcycle disc locks are attached to your wheel and brakes and prevent thieves from wheeling your motorcycle off. Disc locks come in two varieties: alarmed and non-alarmed. Non-alarmed disc locks are meant to be strong point attached to your brake that can’t easily be hammered or clipped off. Alarm versions add sensors to the disc lock so if someone attempts to remove them the alarm sounds. Of course, alarm sensitivity will be an issue as you don’t want it going off constantly. Compared to the bike cable, a disc lock is more effective when you’re out and about, and it can be used anywhere.

In addition to or instead of a disc lock alarm, you can opt for a centralized bike alarm. These alarms use sensors to detect any impacts or tilt inflicted on the bike, and even when a thief tampers with the accessories on your bike, the alarm is designed to go off. Again, you need to find the right sensitivity in the alarm as you don’t want it going off all the time, and you’ll want to select an intuitive system that you don’t accidentally set off either.

One final added deterrent comes in the GPS tracker. These devices are attached to your bike, and if it is ever stolen, the GPS signature will lead authorities to the location of the bike. A GPS tracker needs to be small and well-hidden on your bike, and any wise thief will find it eventually, so your tracking time is limited. There are also service limits to GPS trackers, and if a thief takes your bike far off the grid, the signal might not show up. Still, a GPS tracker combined with an alarm should give you a good chance of stopping or catching a bike thief. 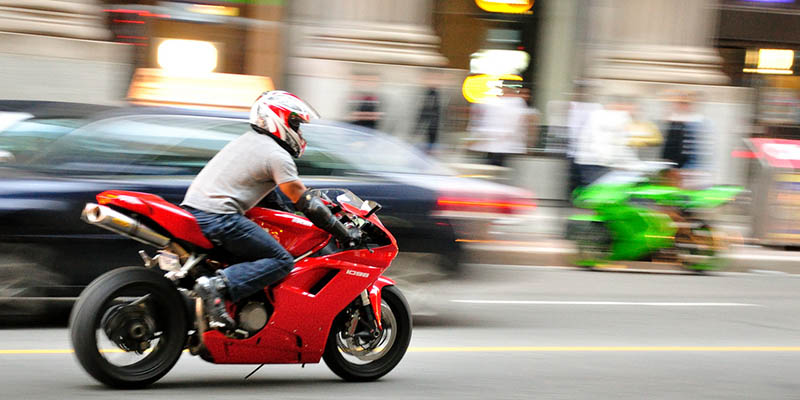 One other coverage note, if you plan to customize or already own a customized bike, be sure to add custom parts and accessories coverage to your bike as certain custom parts may not be covered by a comprehensive coverage plan.

Image one, two and three courtesy of Wikimedia Commons.

Are you ready to save time, aggravation, and money? The team at Square State Insurance is here and ready to make the process as painless as possible. We look forward to meeting you!

Start Here
Jeff has been so helpful to myself and now myself and my husband over the past 7 years with old cars, new cars, renters insurance,...
Read More »
a month ago
Kaitlyn Runnels
Jeff Evans at Square State Insurance helped my husband and me with auto, renters, and homeowner insurance. Jeff is very knowledgeable and took the time...
Read More »
9 months ago
Amanda LeFebvre
Jeff helped me navigate auto insurance for the first time on my own. I can't thank him enough for not only helping me find a...
Read More »
2 weeks ago
Libby Sullivan
I could not recommend Jeff at Squarespace enough. I went looking for a broker for the first time in my life in 2018 after...
Read More »
6 months ago
Scott Schneier
Highly recommend Jeff for anyone looking to get a great deal on insurance with quality customer service. He was quick to respond and helped us...
Read More »
6 months ago
Jessica Yang
Call Email Text Reviews
Live Chat
×
Send Message In App
Click Here To Schedule A Call With Us Schedule Call
×