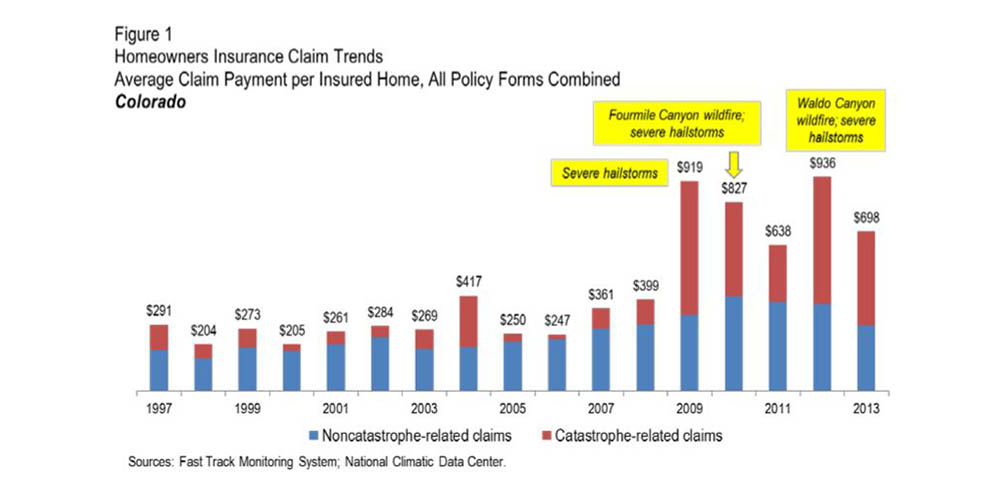 Over the past few years, homeowner insurance claims have been on a steady rise, and this isn’t good news for your homeowners insurance premium. Much of the rise in claims has been attributed to catastrophic events like storms and forest fires, and looking back at the past few years in Colorado, this shouldn’t come as much of a surprise. But you’re not powerless in the wake of these rising claims, and you certainly shouldn’t just cross your fingers and hope you don’t become part of the trend. Let’s dig a little deeper into why claims are rising in Colorado as well as examine ways you can help keep your homeowners premium low.

Homeowners Insurance Claims Are Trending Up

The Insurance Research Council is one of many organizations that conducts long-term studies of insurance trends, and we’ll be referring to their recent homeowners insurance studies for the purpose of this article (see graph below). When we look back to the late 1990 and early 2000s, we can see that homeowners claims, both catastrophic and non-catastrophic, were fairly even year after year.

However that normalcy began to change in 2007 and 2008, and in 2009 the amount of claims skyrocketed in Colorado. This was primarily due to a host of severe storms in 2009, but you’ll also notice that non-catastrophic claims were at an all-time high for the period as well. Unfortunately 2009 was not just a freak year, and the higher amount of claims has continued throughout the study period. As organizations crunch the data on 2014 and 2015 claims, you can expect the data to be similar. It appears that for the foreseeable future, an increased amount of claims is here to stay.

What This Means For Your Homeowners Rates

Thankfully Colorado doesn’t have the highest homeowners insurance costs in the nation. Typically southern states that experience yearly hurricane threats like Florida, Louisiana and Texas have the highest insurance costs. But the trend in increased claims is still happening all over the country. Here in Colorado there are several reasons for this. The first and most apparent reason is the increased frequency of severe storms and wildfires, but there are other factors that contribute as well. Homes are becoming more complex here in Colorado, especially during the recent real estate boom, and that increased complexity as well as the growing cost of building materials can drive the cost of claims up. Long story short, all this means that your homeowners premium is bound to rise over the next couple years.

How You Can Keep Homeowners Insurance Costs Low

Although this trend is certainly less than ideal for homeowners on a budget, there are a few things you can do to lower the cost of your homeowners insurance even as claims rise.

Improve Your Home To Reduce Risk

As a homeowner, there is a lot you can do to your home that will reduce risk and many times your insurance costs. Prepare your home for storm season by removing trees that threaten your house or your neighbors house. Clean your gutters and check to make sure water is flowing away from your house effectively. If you don’t have them already, consider investing in storm shutters and a sump pump, and then check them yearly to make sure they are in good shape. You can also reduce fire risk by keeping your electrical wire and appliances up to date.

Finally, you can contact Square State Insurance to see how these improvements might effect your homeowners costs. Be sure to follow up with Square State yearly to evaluate how your situation and improvements have changed.

A higher deductible can mean lower monthly homeowners costs, and this can be an especially prudent move for those who make home improvements to reduce risk. Contact Jeff to see how a higher deductible might change your insurance rates.

Image one courtesy of the Insurance Research Council. Images two and four courtesy of Wikimedia Commons.